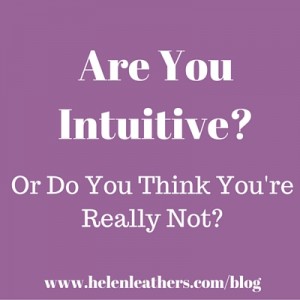 Whenever I’ve asked this question,

Do you consider yourself to be intuitive?

the majority of people I know, or come in to contact with, believe they are intuitive. Some more so than others.

A minority will tell me they’re not intuitive. Of this minority, when I make further enquiries, about two thirds will admit to having a gut instinct, a hunch, or a ‘something feels off’ moment from time to time.

These are other words for your intuitive responses

Being intuitive doesn’t mean you always follow your hunches, it just means you get them in some way. Many of us don’t have the confidence to follow our intuition, we just don’t trust it enough – but that’s another story!

Here’s a quick quiz for you. Have you ever…

If you have said yes to at least one of these questions you are probably a little intuitive.

If you have said yes to more than one, you are definitely intuitive.

If you have said no to them all, I probably haven’t asked the right question for you! Or you may be one of the small minority yet to experience an intuitive flash.

I believe everyone is intuitive to some degree, or at least has  the ability to be, with help.

Often when you start this sort of conversation it can run for hours, with people telling their stories about ‘the time when…’ and comparing notes. Try it the next time you’re with a group of people.

As is said in my all-time favourite film, Practical Magic, ‘There’s a little witch in all of us’.

For more info revealed in my intuition survey click through here