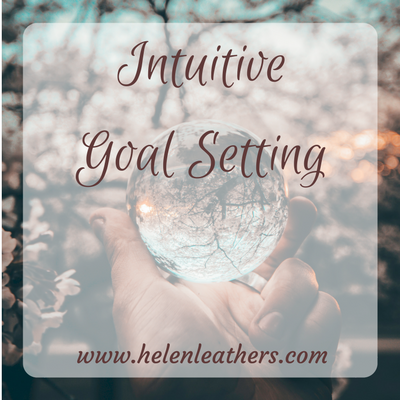 Last year I had a massive revelation.

I thought that I had set goals throughout my life and achieved them. I was wrong.

Not entirely, but mostly I was wrong.

I think I had been doing ‘intuitive goal setting’, which feels very different.

I Thought I Had Been Great At Goal Setting

I wouldn’t go as far as to say ‘Goal-setting doesn’t work’, there are plenty of goals I have achieved. But I would say  that those I found easy, that magically just happened weren’t really goals as such.

Intuition + Goal Setting: Do They Go Together?

They were more inspired intentions, and heart-felt visions for my future, it was more intuitive goal setting than the traditional type. One day I suddenly got a feeling that I should start a business, write a book, find a course…. Etc. and you know what? I did, easily, and with help that just suddenly appeared. The coincidences that happen in my life are just brilliant.

What’s the difference? I hear you ask…

Goals appear to me to be external and come from the head. We plan them in reaction to something else, to feeling less than, to not having enough.

Inspired Intentions or intuitive goals are more of a feeling that guide us to the end result. They are internal and give us a feeling of heart-felt satisfaction and joy.

I felt like a heretic, everyone in the business world was talking goal setting, I had spoken about it and trained  a few sessions on it too, hell – I’d told people I was really good at it! And I was, but I realised I worked differently. Then I heard another (very inspirational) lady speaking about, and I thought, ‘thank goodness, it’s not just me’. Now I feel I can ‘come out’ about it, so to speak.

Inspired Intentions and Intuitive Goal Setting Work For Me

How do you make this work in the real world? Well I believe that by being in connection with my true self, (and source) and actively developing my intuition and my spiritual side, I can be truly on purpose and able to connect with my heart visions. I see or feel what my future holds and that helps me to achieve the things that I can see or feel in my mind’s eye. Sometimes it might be like a whisper in my ear from my intuitive self.

Some people may say this is semantics, that I am talking about goal setting by a different name. But to me it feels different. To me it feels more congruent and purposeful.

In my coaching and training, as in life, I work intuitively and often challenge the normal way of doing things.

This way of goal setting is more gentle, and it’s often more profound and easier, especially, I believe, for women.

I wonder if this helps you, at least to look at things in a slightly different way. I wonder if this is an easier way for women to work or do men work in this way too? I can only speak from my perspective, but it should give you some food for thought as to how you can bring a little more magic and manifestation in to you life, your ‘goal-setting’, and your achievements,