Do you get stressed out easily by life? Baffled by the actions of others (which I do understand can often be bewildering)? Caught up in life’s dramas? Do you wish you could be more calm when things seem to go wrong?

Or maybe you are calm and see others running round like mad and you don’t quite grasp why they don’t ‘get’ things in the same way that you do?

It’s all about whether you can see, understand and accept the connections, that things happen for a reason, as part of a bigger picture. 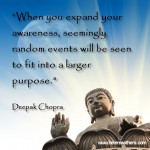 I have often wondered why it is that some people see connections in life, between events and people, and others just don’t. Have you ever noticed that? It’s not always easy but when ‘stuff’ happens in life, some people focus in on the detail of it, and often allow themselves to become a victim of it. While others are able to stand back, a little more detached, and be less (although not totally) affected by it somehow. If you have ever been able to do this to any extent you may have noticed those who can’t look at you like you are mad because you are able to seemingly ‘see’ reason behind it that they can’t. Previously I have thought that my interpretation and understanding of events within a bigger picture was because I had a more philosophical or spiritual approach to life. In the past I have heard those who are unable to see this reasoning described as ‘new souls’ inferring that they had alot to learn on their ‘spiritual’ journey. But I don’t think that is the whole story. I found this quote today from Deepak Chopra, and it started me thinking.

“When you expand your awareness, seemingly random events will be seen to fit into a larger purpose.”

Many people that I know who have a sense of this ‘bigger picture’ aren’t necessarily particularly spiritual, or philosophical, but what they do have in common is an open, expanded and expanding mind. They seek knowledge, they seek personal development, and they seek success – by their own definition. They have expanded their awareness, of themselves and as a result, of others.

They also have an open, expanded and expanding heart. This may seem odd, but they do. They LOVE seeing others develop, succeed and learn new things, almost as much as they enjoy doing it themselves. When they are part of that process for and with someone else they love it even more. Their heart AND their minds go out to others.

Because they understand that we are all part of the bigger picture.

Once you start to expand your awareness you start to think differently, you start to see the results of cause and effect, you begin to understand how things slot together. And whilst it’s not always immediately obvious why a certain event has happened, you have an inner ability to accept that there must be a reason and that it will eventually come to light.

People who are able to see the bigger picture are less stressed, more laid back, accepting of others, non-judgemental and really interesting to talk to.

If you’re thinking, I want to be like that, then as a start, meditation is a great tool to develop bigger picture thinking.

P.S. I don’t always get it right myself, sometimes seeing the bigger picture is hard to do but we can only get better at it.