What A Coincidence, Why Didn't I Meet You Sooner?

What A Coincidence, Why Didn’t I Meet You Sooner?

Accident, Coincidence, A Chance Meeting,And There They Are. Meeting Someone Who Turns Out To Be Your Soul Mate, Best Mate Or Just Who You Need Right Now Is A Real Blessing.

But is it really a coincidence? Something that has happened by sheer accident? I don’t think so. Could there be a divine plan? Is it fate? In the same way that I believe everything happens for a reason, I believe that people come into your life at exactly the right time and for a very definite reason too.

This week, in between various work commitments I have had the pleasure of catching up with some good friends and a common discussion thread has come up – ‘coincidence’. With many of my close (spiritual minded) friends we have discovered that our paths have crossed, often many times in the years running up to our actual meeting and becoming friends.

One particular example is my meeting Diane, my co-author on ‘Help! I Think I Might Be Psychic’ and ‘The Psychic Workbook Collection’. We met at the beginning of 2002 because I was asked to go and speak to the psychic development group that she was involved in. It turns out that (by coincidence) we had been going to the same workshops in the years running up to this and we still don’t remember each other being there. This may not sound too odd but these workshops were small, maybe 12 people, and we would have been by far the youngest attendees, and of a similar age. Do you know how difficult it is to meet people of the same age (when you’re in your early 20’s) who are into the kind of ‘weird stuff’ that we were into? Plain old common sense says that through this coincidence we should have bonded straight away and become firm friends. Diane and her mum also used to visit and buy from our mutual friend who sold crystals from my dad’s shop premises – I was probably there myself but we never met.

Another example is my good friend Debs. We worked together (although in different departments) at a mobile phone service provider in 1997  and got on really well. Debs loved crystals, as did I, and we went to crystal exhibitions, wholesalers and The Mind Body Spirit Festival in London together, eventually I taught Debs Reiki. We lost touch and then I moved out of the area. In 2011 we got back in touch and it was only then that we discovered our own coincidences – that is just how many times our paths had crossed and how our lives had been paralleled, albeit sometimes separated by a few years. Our parents had lived in the same street in North London in the 70’s (I was a baby and Debs a little older), she had been an officer in the City of London Police based at the same station where I had been on a work shadow scheme with a view to joining up myself after school. It also turns out that Debs and Diane knew each other as well – what a coincidence?

A host of cross overs, crazy coincidences, startling synchronicities and finally, serendipity drew us all together. But Why? 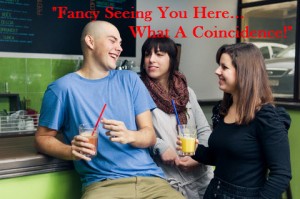 When we later spot a coincidence are they a way of us striking up a friendship and building rapport based on common ground?

Are we, as some people believe is possible, from the same ‘soul group’ that consistently comes back together throughout subsequent lifetimes?

Are we supposed to learn something important from each other?

Or do people join us on our journey (or come back in to our lives) at just the right time to help, support, encourage and inspire us when we need them the most. Both of these lovely ladies have done all of these things for me (and I am fortunate that there are others like them in my life, I’m just using these two as examples).

I don’t believe in coincidences.

By that I mean that I don’t believe these things happen by chance. There are no accidents, everything happens for a reason. I also know that we can also draw the right people to us by asking the universe for them – use prayer if that’s a word your more comfortable with, or cosmic ordering / the law of attraction / the secret if you prefer. Ask and they will come, be open to ‘coincidence’ but know that it is far from coincidental when you meet them. Be thankful for these moments, for the wonderful people you meet are truly blessings.

I’d love to hear your stories of seeming coincidences, feel free to post them below or on my facebook page.

P.S. When it comes to meeting new people, do accept all coincidences that the universe provides but always use common sense too.