How To Spot When You Are Being Intuitive

Wouldn’t It Be Funny If…? How To Spot An Intuitive Moment 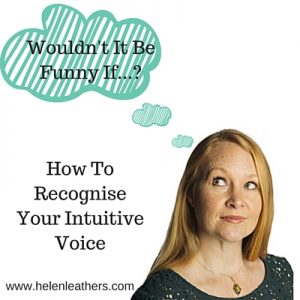 Sometimes we don’t realise our intuition is speaking to us, so I want to share some BIG SIGNS to look out for, to help you recognise those intuitive flashes.

I was talking to my sister last weekend and she was telling me about something that had happened at work where she ignored her intuition. It went something like…

“The thought popped in to my head, ‘Wouldn’t it be funny if ‘x’ happened’. And within 5 minutes, guess what? It happened! It always pops in to my head like that when something is about to happen… Why didn’t I follow my intuition?

(That’s a question for another time! You can read more here)

Here are some BIG RED FLAGS that could be your intuition telling you something. If you randomly, spontaneously, or without thinking, wonder or say out loud anything like:

Then for goodness sake LISTEN! then do something about it, you just don’t know the difference it could make.

Your Intuition Could Save your Life!

I had had a similar message from someone on a blog post telling me how a thought like this had saved his life some years ago…”If ‘x’ happens now, I’ll be dead, So I changed what I was doing, and then it happened. If I hadn’t changed what I had been doing, I would have been dead” (I’m paraphrasing his story but you get the drift – his intuitive thought saved his life!)

This has happened to me so many time, ever since I was quite small. But it wasn’t until this message and the conversation with my sister that I realised, it’s not just me! And you lovely people who want to be more in tune, to be more intuitive, need to know what to look out for.

Also, I would add that if you have small children (or even not so small)and they use one of these phrases, or make a joke out of something potentially happening, I would suggest that could be their intuition speaking. You may want to listen and take the seriously! They don’t have the sort of filters on their thoughts that we have.